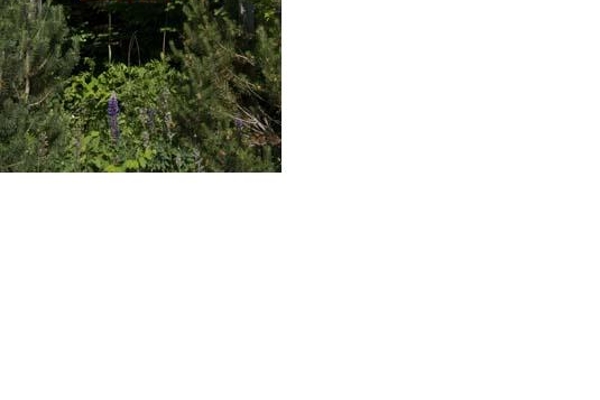 The area north of Millinocket is a vast sweep of forest, dotted with lakes and ledge and cut by one of the most fabled rivers in Maine, the West Branch of the Penobscot. This is Thoreau country, the setting for the journies described in Henry David Thoreau's The Maine Woods. It is a land rich in human and natural history, and nowhere more so than at Big Eddy, where the Penobscot River finally slows after a 5-mile tumble through the rapids of Ripogenus Gorge.

Situated just outside Baxter State Park, Big Eddy is considered a world-class site for Landlocked Salmon and has been a destination for fishermen for at least 100 years. The road to Big Eddy is equally stirring. Just beyond Millinocket, the grand Katahdin Range looms on the horizon, and the summits of Doubletop, The Owl, the Brothers, and Mt. O-J-I are all visible on a clear day. It is still possible to see more Moose than cars on an early-morning drive on the Golden Road. Then there is the river itself, a dark constant cutting through the region's geology and culture.
Big Eddy remains one of those rare places that seem unchanged by time. Join us for an experience in one of the most spectacular places in New England!

IMPORTANT NOTICE:
The Maine Department of Agriculture is asking all campers to leave their firewood at home, due to the serious threat from invasive forest insects. Firewood is not allowed from more than 50 miles away per Katahdin Timberlands and other landowners in the area. Two species are posing very serious threats to Maine's trees and forests.

Please note there is no phone at Big Eddy questions should be directed to bigeddy@chewonki.org

Please review the terms and conditions at the bottom of this page before booking your reservation. 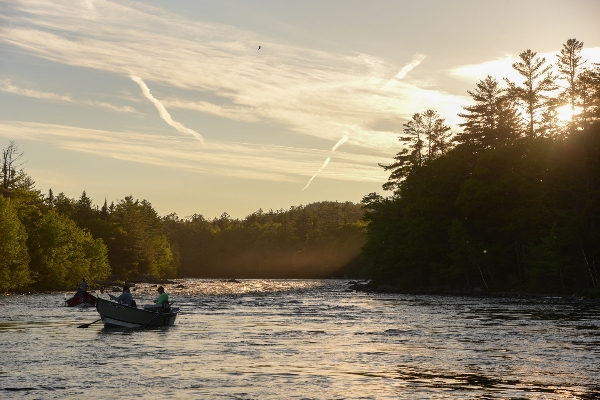 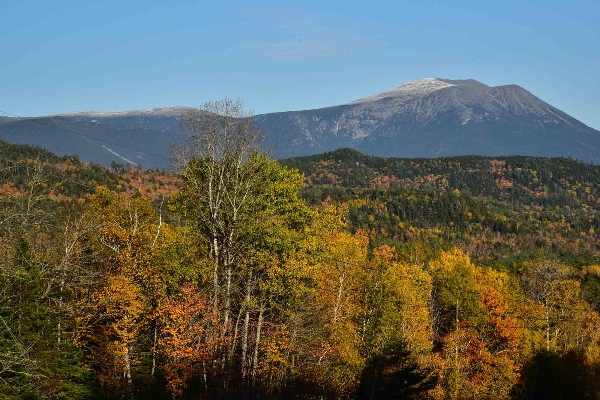 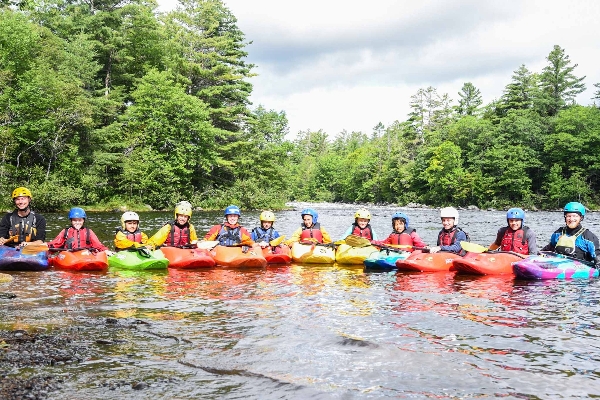 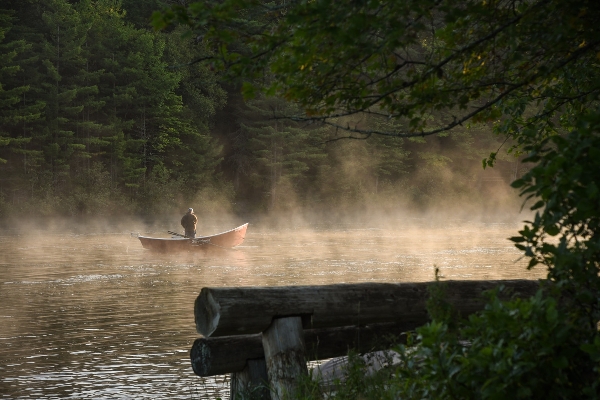 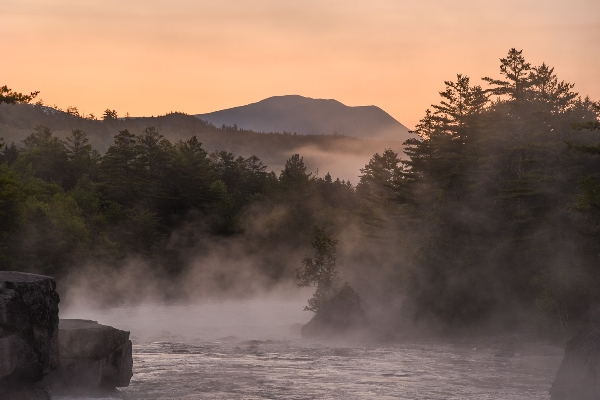 Price listed is per adult per night. The Eddy cabin and Crib cabin are both rustic cabins. There is a propane fridge and two burner cook top. Rented for 2021 season. Price is per person per night. Permanent 10x12 canvas wall tent. Leave your tent at home! Bring your sleeping pad, bag/blankets, and pillow.

This cabin will not be available during the 2021 season. Rates are per person per night. Rates are per person per night. Cozy cabins are for those looking for a sheltered option, but want to bring their camping gear.

Items sold in the store related to fly fishing supplies

Cabin is rented for the 2021 season. The rate listed is per person/per night. Pray’s cabin is a rustic camping cabin that sleeps 6. It has potable water available by a spigot outside the cabin. Price listed is per adult per night. Big A Cabin is a rustic cabin that can sleep up to 4 people. There is a propane fridge and two burner cook top.

These sites are for groups of 6 people or more.
Please note our quiet hours, 10pm to 7am.

The rate listed is per person/per night. These non-river sites can accommodate a tent or a pop up. No electricity.

The rate listed is per person/per night. Please refer to the campground map for specific site numbers. For some sites you need to walk your belongings down a short hill, some may have small 10' x 10' platforms.

Water side - tent or pop/up

The rate listed is per person/per night. Close to river; sites that can accommodate tents or a small pop up trailer. Please ask for site suggestions if you have never been here before.

The rate listed is per person/per night. We have 5 sites that are on the river and are reserved for those with RV's and trailers (up to 28') Very limited electricity available.

Seasonal boat launch $80 per season, includes use of campground vaulted toilets, and public area for picnics as well as boat launching from May through September.

Thank you for your interest in reserving a campsite at Chewonki’s Big Eddy Campground. Big Eddy is a quiet, remote campground located off the grid, and it is important to understand that there is limited electricity available and that water, and electrical hookups are not directly available at all campsites. Checking yes to the Terms and Conditions means that you have read and understand and will uphold the following expectations for campers at Big Eddy Campground.

*All RV and travel trailers must be road ready and registered with a current license plate.

*Small, quiet generators may be used to recharge batteries from 8-10am and again from 4-8pm daily.

*Big Eddy Management reserves the right to ask that a generator be turned off at any time if it is deemed too loud or impacts other campers.

*Limited electricity will be available at a few sites on the office side of the river. Electricity is generally available for a couple hours each morning and again each evening. We do not provide electricity 24/7.

*Quiet hours are from 10pm to 7am daily.

*Friendly, quiet dogs who are currently licensed and have up to date rabies shots are welcome but must remain on leash or under direct voice command of their owner/s while in the campground. Limit of two dogs per campsite. Owners are responsible for the actions of their dog and for cleaning up after them.

*Big Eddy Management reserves the right to have a threatening or barking dog removed immediately from the campground.

*Shower use is limited to when the generator is in operation, generally from 8-10 AM and 6-9 PM.

*Campsites and the areas surrounding your campsite must be kept clean and free of rubbish and returnables.

*Outside lighting shall be kept to a minimum and turned off once you retire for the night. This is to acknowledge that the night sky over Big Eddy is amongst the clearest in the east and an unobstructed view of the night sky is important to many of our guests.

*We provide firewood for sale at the office. Firewood burned at fire pits should not be transported a distance greater than 50 miles from Big Eddy so as to help control the spread of invasive species.

Big Eddy Campground is owned and operated by Chewonki. The individual who signs this agreement accepts camping privileges with the understanding that they do hereby release Chewonki, its officers, employees, and volunteers of all liability for loss or damage to property and injury to their person arising out of their use of Big Eddy Campground’s facilities and agrees to indemnify and hold harmless Chewonki, its officers, employees and volunteers, against claims resulting from loss or damage to property or injury to the person of any member of the family or guest of the same registered individual arising out of the use of the Chewonki facilities.

Please email Chewonki's Big Eddy Campground (bigeddy@chewonki.org) with any questions or concerns or for more assistance prior to making a reservation.